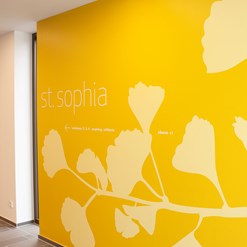 Labeling individualizes the elements of the guidance system

Labelling techniques include a wide range of options for implementing texts, symbols and graphics. We distinguish into different groups:

1. lettering on foil and paper for self-labelling as standard of our sign systems.

5. lettering from profile letters. Letter bodies with and without interior lighting according to illuminated advertising standard.